Thanksgiving Verse Today:  Colossians 3:17,  ‘And whatever you do, whether in word or deed, do it all in the name of the Lord Jesus, giving thanks to God the Father through him.

I wish I had more pictures to share with you of all the bloggers that have encouraged me in the past year of recovery and blogging, but today I am going to start with a just a few of them.

Find those other bloggers/friends/family that can help you along in the #recovery journey! #bloggers #recoverycommunity

I am incredibly grateful to God that each one of these has played a role in my life that they may never know.  Each one journals the heart through their blog.  Each woman seems to understand that their blog is the way of communicating thoughts and feelings you wouldn’t otherwise be able to share, and they impact people every day with their words.

END_OF_DOCUMENT_TOKEN_TO_BE_REPLACED

*Cue Jumping up and Down and Smiling inside….*

I am SO excited to share a guest post with you from one of my favorite recovery bloggers at ‘Beauty Beyond Bones.’   This girl has encouraged me numerous times by her love for Jesus, her grasp of scripture, and her walk with the Lord.   I want you can be encouraged by this heartfelt reminder of why you are never too broken for the power of the great Healer, Jesus Christ, who came to ‘call sinners, not the righteous to repentance.’

When Emily approached me to guest blog on her site, I was absolutely honored. I have so loved getting to know this beautiful warrior through her blog posts and I honestly feel like I know her heart. Her love for our Creator radiates through her words and beams from her gorgeous smile. So, thank you, Emily, for having me on here!

And I hope to get to know you, reading this! I’d love to connect on IG (@Beauty.Beyond.Bones or through my site!) xx

So anyways, let’s jump right in. 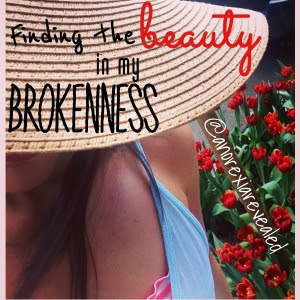 “I’m too broken.”
How many times have we thought that? “I’m too messed up. Too far gone. Hopeless. What I’ve done is beyond the point of forgiveness. I’m too dirty. If people were to see the real me, they’d hate me and never forgive me. I’m too broken.” 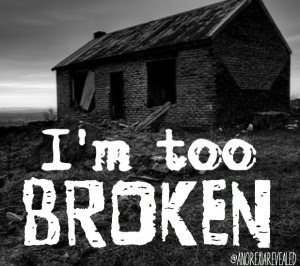 Maybe some of you are feeling stuck in that place. I know I was stuck there for a long, long time: Not feeling like I deserved forgiveness. Feeling too dirty and guilty to be loved.

Here’s what helped me:

There’s a story in the Bible of the woman caught in adultery. Many people believe this woman was Mary Magdalene, but it never actually identifies the woman’s identity. And I kind of like that, because it allows me to see myself as this woman. 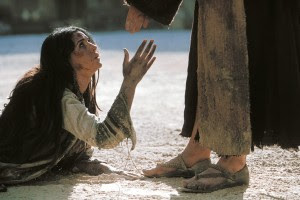 Anyway, in John:8, a woman gets caught in the act of adultery. The penalty for this crime was being stoned to death.

Let me say that again: they would throw rocks at her until she died. 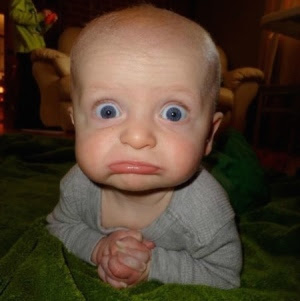 I know. Barbaric, right?!
Anyway…this woman had been caught in some random man’s bed. She was guilty. Dirty. A prostitute. She was, in every sense of the word, broken.
But then Jesus comes on the scene. Here is this woman at court, in front of the men who will stone her to death, and He says, “If any one of you is without sin, let him be the first to throw a stone at her.” And with that, they all turned around and left.
Then Jesus was left alone with the woman.
So Jesus picked up the woman from the ground and said to her, “Woman, where are they? Has no one condemned you?” She said, “No one, sir.” Then Jesus replied, “Then, neither do I condemn you. Go now, and leave your life of sin.”

This is such a comforting image, of Jesus, stooping down to pick up the broken, guilty woman. 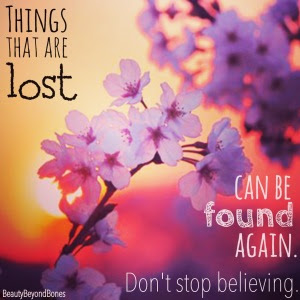 But to really understand this passage, we have to know what “condemn” truly means. I never really understood its meaning growing up, and it wasn’t until I learned the definition that this story really spoke to me.

Condemn means: to express an unfavorable judgement on; indicate strong disapproval of; to pronounce to be guilty; sentence to punishment; to declare incurable.

To declare incurable.
How many times have you or I thought that our eating disorder is simply incurable. That my past makes me incurable. Hopeless. A lost cause. That I will never be able to overcome this despair?
I see myself so much in this woman. Here I was, broken. I was a shell of a person: dirty, outcast, guilty. I was lifeless, and just entrenched in my anorexia. I was lying to everyone I loved. I was killing my body. I was so self-centered that I was driving God out of the picture. I was prideful, vain, deceitful. I was harboring absolute hatred for myself – I hated the creation of God: me. I was the picture of brokenness. I was dirty. I did not deserve to even touch the sandals of the Lord. I felt unworthy to even come before God in prayer. I couldn’t look Him in the face. I was too broken. 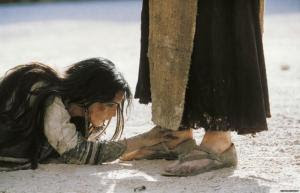 “I do not condemn you.”
That’s what Jesus said to this woman who was just as broken and dirty as I was. She was caught in adultery. A prostitute. She was guilty. Unclean. Just like me.
“I do not condemn you.”
I do not declare you incurable. I don’t judge you as guilty. I don’t sentence you to punishment.
Jesus responded to this woman with love. He picked her up off the ground, saved her life, affirmed her, and set her free from her past.

He didn’t say, “I’m not going to judge you right now, but just don’t come back, ‘cuz tomorrow it’ll be a different story.” It wasn’t, “Oh, you’re catching me on a good day…I’ll give you a free pass..today.” No, it was, “I don’t condemn you.” 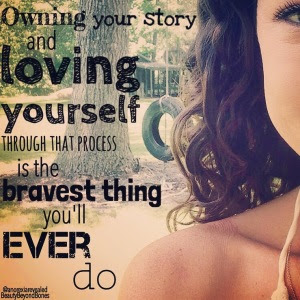 And then, here’s the kicker: He said: “Go, and leave your life of sin.”
It was not, “I’m not condemning you right now, but you’re going to have to carry your past around with you as a burden for ever. You’re going to have this terrible shadow follow you around from now on.” No. He set her free. “Go, and leave your life of sin.” He picked her up from the dust. ‘Leave the past in the past — leave it in the dust, and be free.’ 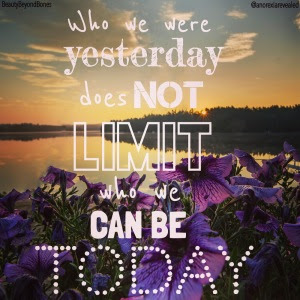 There is nothing that is too dirty for Jesus. There is nothing in your past that would have made Jesus go, “Ohhh, she’s guilty of that?…Stone away!” Nope. Nothing. And you know why?
The Cross.
Why did Jesus not condemn this woman? I found myself asking that. Why not? She was guilty. Why was she the exception to the law? Surely, I wouldn’t have been so lucky. Jesus wouldn’t have saved me if he saw me down on the ground. Mary Magdalene must have been really pretty, or something.
Wrong. Wrong. Wrong.
And it boils down to this last thing: The Cross.
The Cross stands for two things: Love and Condemnation.
You’re scratching your head. “Love, I get. But condemnation?” But just stay with me for 2 more minutes, I promise this comes full circle.
1) LOVE : The Cross is Love. The love that Jesus would die on a cross for you. For me. So that we could get to Heaven and live forever with Him in eternity.
But why? We hear that all the time. Why? How exactly? Why’d He have to die? I get that it’s a grand gesture, but why? And it has to do with this last thing:
2) CONDEMNATION :
John 3:17 “For God did not send his Son into the world to condemn the world; but that the world might be saved through Him.”
Let’s go back for a second to the definition of condemnation. To condemn is to pronounce to be guilty, to sentence to punishment, to declare incurable.
We are guilty. We all have things that we’re guilty of. Just off the top of my head for myself personally…lying, gossiping, cheating, my eating disorder, vanity, judging, stealing, idolatry. WE ARE ALL DIRTY, BROKEN, UNCLEAN, PEOPLE. We are all that woman on the ground, caught in adultery. We are all guilty. 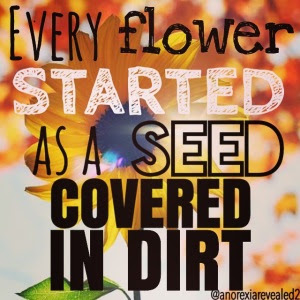 We are all deserving of condemnation. We all deserve punishment for all of the shitty things we do. For our lies. For our hurtful comments. For our eating disorder. We deserve to be condemned.
But…
JESUS WAS CONDEMNED FOR US.
That was the point of the cross. That was the entire reason why Jesus died: so that WE would not have to endure the punishment that we so deserve. Jesus endured it for us. For me. For you. That’s how great His love is for you and me. That’s how much He cares for you and me: that He would take the punishment for our guilt: for my lies, for my deception, for my eating disorder. He endured the punishment so that I don’t have to.
He doesn’t condemn us, because He was condemned for us.
That’s why Jesus picked up the adulterous woman from the dirt and set her free: because He already paid the price for her dirtiness and her adultery. And that’s why he picks you and me up off the ground: because He already paid the price of our eating disorder.

We are all broken and hurting individuals. We all have pain and imperfections. We are all that woman in the dirt. We don’t have to wear a mask to cover that up. We don’t have to pretend that we’ve got it all together. We have nothing to hide, because Jesus already paid the price for everything we’re hiding behind the mask – for everything we’re covering up when we say, “I’m fine.” 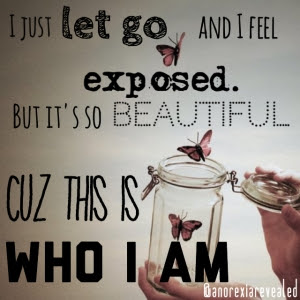 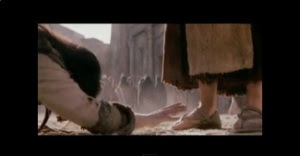 That’s what He wants to do for you. He wants you to reach out to Him, so that He can affirm you and set you free from ED.

“Then neither do I condemn you. Go, and leave your life of sin.” 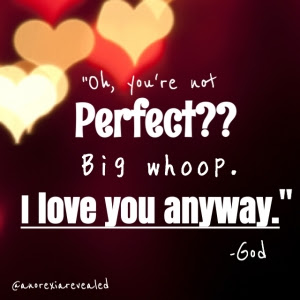 You are never too broken sisters and brothers… <3

In Mark 2:16-17 Jesus had such a powerful answer for those who accused Him of eating with those who were ‘dirty’ and ‘sinful.’  This passage reminds me of the AWESOME wonder of His amazing salvation!

“And when the scribes and Pharisees saw him eat with publicans and sinners, they said unto his disciples, How is it that he eateth and drinketh with publicans and sinners? When Jesus heard it, he saith unto them, They that are whole have no need of the physician, but they that are sick: I came not to call the righteous, but sinners to repentance.”

The Life of the Writer

I'm an ordinary girl. I love Jesus most of all, running, puppies, cooking, good food, dessert, my FAMILY, friends, my church, and peanut butter. . . on lots of things.

I live in the beautiful state of Colorado where 14ers are to give you all the sore legs you need, amazing skiing, plenty of other runners, glorious sunsets, majestic elk herds, and peaceful country roads with clear air.

Go Back in Time!

I am a very ordinary girl. I’m 24, but if you met me, you wouldn’t believe me. I am passionate about girls finding true beauty in Christ. I love peanut butter, icecream, and salad. My hobbies are cooking, baking, sharing laughs and tears with others, and sharing the fullness of joy that Christ has put in me. I love reading other blogs, and I hope that this will be a place where you can find encouragement, recipes, smiles, and joy. Click here to read more about me...